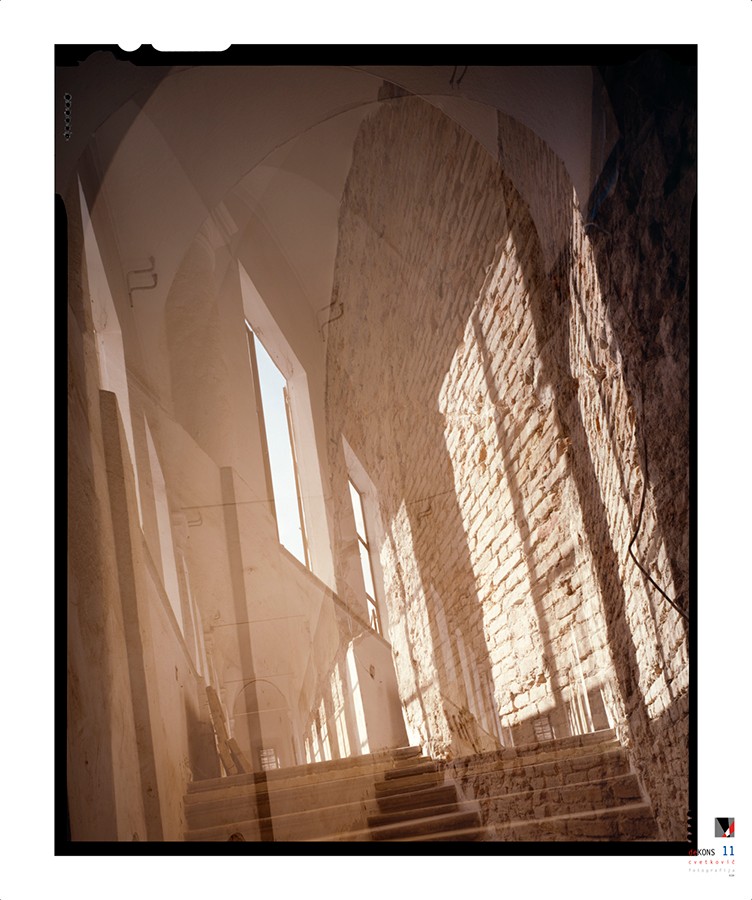 deKONS “Deconstruction of Light – Sequential Constructions of the Space Planes: the Spaces of Spaces”

Aleksander Bassin, director of the City Art Museum Ljubljana, wrote in his foreword to the catalogue of the exhibition: “ …Seen as part of the programme of Ljubljana City Museum (Mestni muzej Ljubljana), Cvetkovic`s exhibition can be described as a special visual interpretation of space: for Cvetkovic, historical architecture is a challenge in both its spatial texture and its structural articulation, which the photographer analyzes through the medium of light. Cvetkovic expresses his intuitive sense for the particularities of this medium in different time, sequences and exposures, as well as in his verbal analysis of his approach. This analysis reaches back into history, to the time when modernism and its avant-garde first appeared, by directing our attention to Cvetkovic’s, as it were, modern visually recycled simulacrum, which is not to be seen in contemporary Slovenian photography.”

Cvetkovic develops his concept in his text for the catalogue “Deconstruction of Light – Sequential Constructions of the Space Planes: the Spaces of Spaces” publisher Mestna galerija.

The problem of objective light.

“The approach I develop is researching space by means of light. My fundamental thesis is that light defines space; and light within space is defined by an architectural shell and its eternal structure. What develops here is an issue of typical light or objective capturing of objects with typical light within the space of the object. Typical light, however, is a category which cannot be captured, especially not within a room. There is only the architectural shell and its structure with openings for light, which defines or objectivises rooms and objects in multiple exposures. As far as the visual principle is concerned, these openings define and construct space by means of light. Therefore, we can link the notions of architecture as well as architectural heritage with the medium of light.

On the basis of what I have written, visual objectivisation or documentation of objects and the rooms in which they are located are possible in two ways.

Exterior: with documentary photography in diffused light – the only possible natural light without shade. Thus, we get an objective picture of an object in technical architectural perfection in a two-dimensional space – photography. This concept of objectivisation and typification  was followed by the Düsseldorf school with Berndt and Hilla Becher in their copies of technical industrial architecture in 1960s and 1970s.

I am convinced, though, that the exterior can be visually defined much more clearly, while the interior remains almost out of reach in spite of the aim of being objective.”

On one occasion, he made a comment in a more burlesque, rather radical way: “Is it noon, twelve p.m.? One shot, one picture.”

Construction of perspective with architectural plane.

“Doctrinary typology, minimalist concept, symmetry, perspective correctness and diffused light, which becomes the light of an object and, therefore, a part of the typified image, evolved as the final picture, so typical of Bechers’ industrial photography and documentation. This photographic attitude is only (final) continuation of Bauhaus and later functionalism.

Modernist architects, their associations and schools, if we only mention Gropius, Mendelssohn and Le Corbusier, were looking for the roots in engineer architecture of the time, the so called “non-architecture”, and functionalist aesthetics. Modernism does not only mean a breakup within architecture, in a new construction of architectural envelope, a new definition of space and a different, radical position of closed planes and light openings; it is also seen in a new visual concept and construction of an image.

But these three-dimensional features, an objective predisposition in copying, could not capture the “productive” and ideal aim of the avant-garde mentality of modernism. This shift came with a “new” construction of perspective which is the equivalent to photographic overturning of areas or planes of a picture. This had already been a characteristic of Bauhaus, but it was radicalised in Russian contructivism and suprematism. In their architectural photographs, the Russian constructivists Rodchenko and Lisicky emphasised this tendency, formulating it to its highest degree. We could say that the emphasised, overturned perspective, which they achieved by construing the plane as a space orientation, domination and directive is that new, liberating form of the idea of volition. Light becomes one of the features of an object. Deconstruction of light as a new quality.

All the photographs are 4×5 inch with a Sinar P2 camera, using Rodenstock or Schneider lenses. Slides were shot with multiple exposures exclusively at the location or using the single exposure and other approaches influencing perspective and malleability on location. 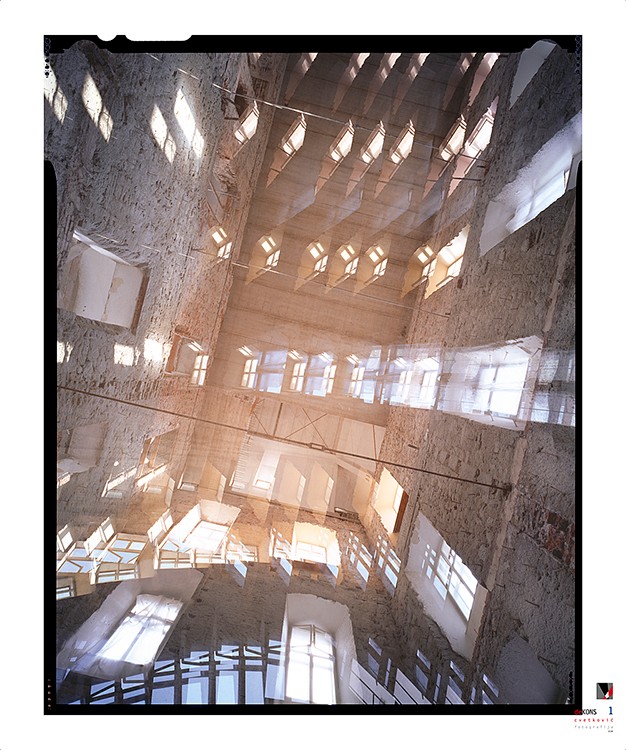 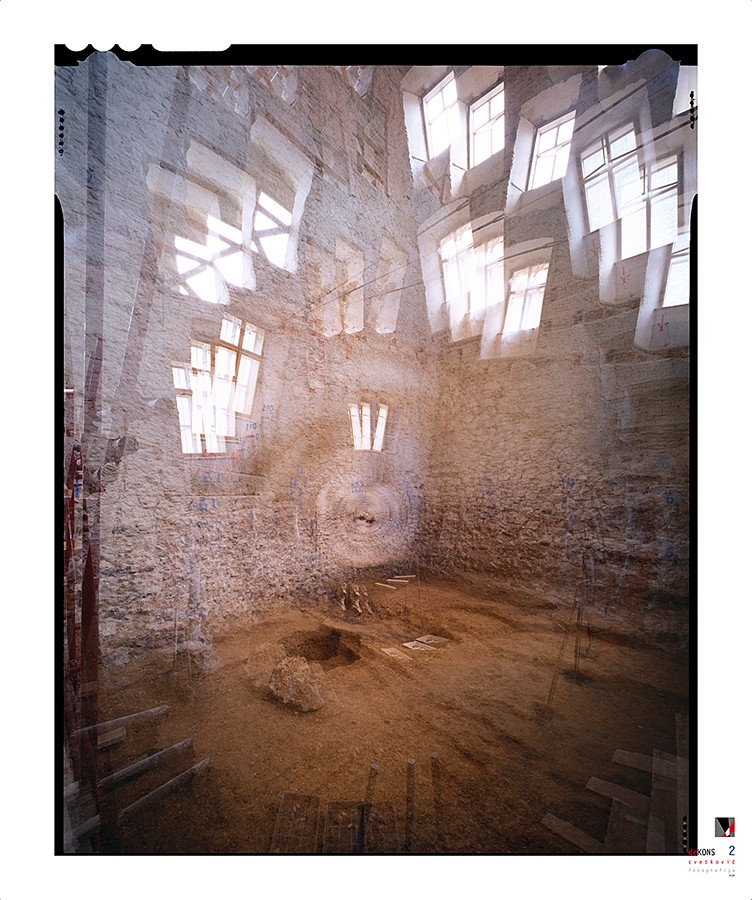 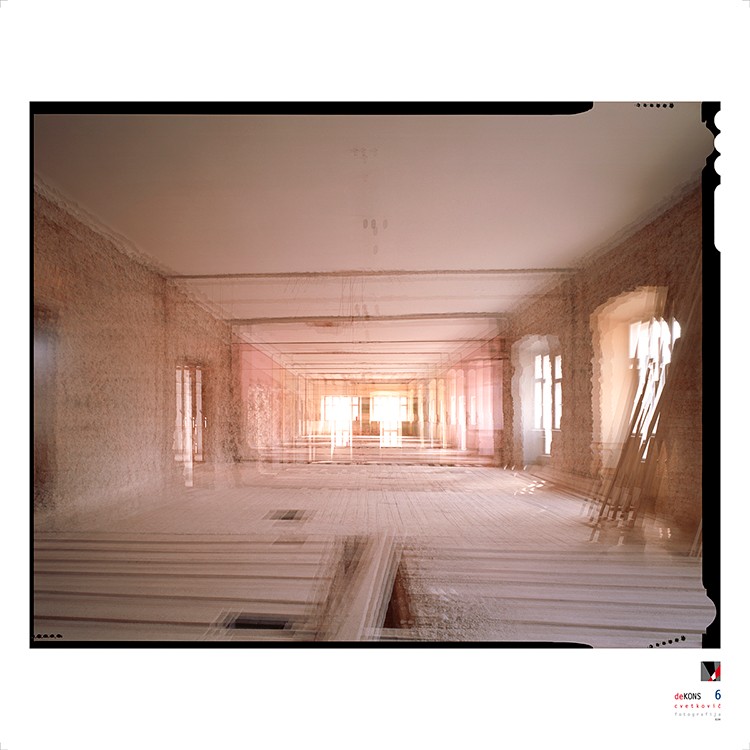 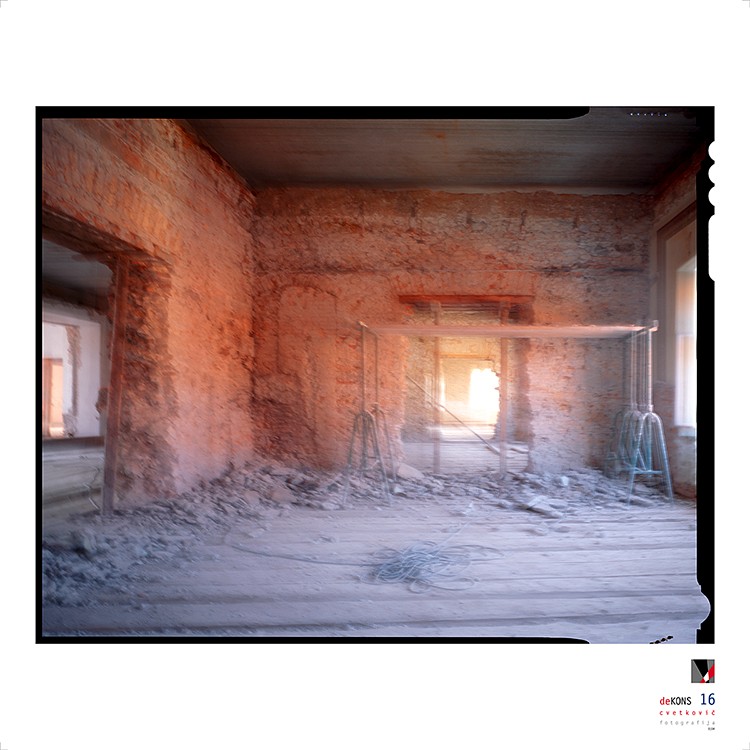 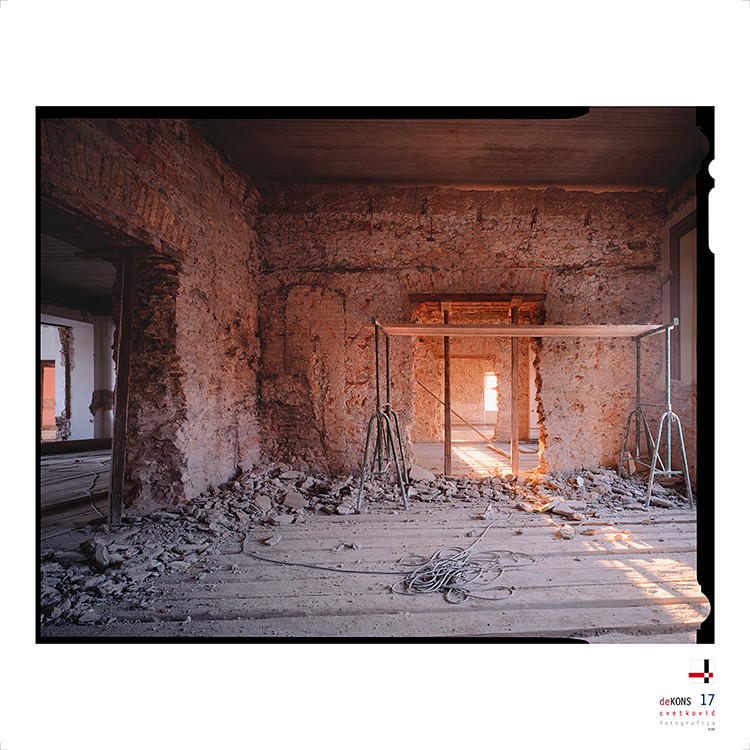 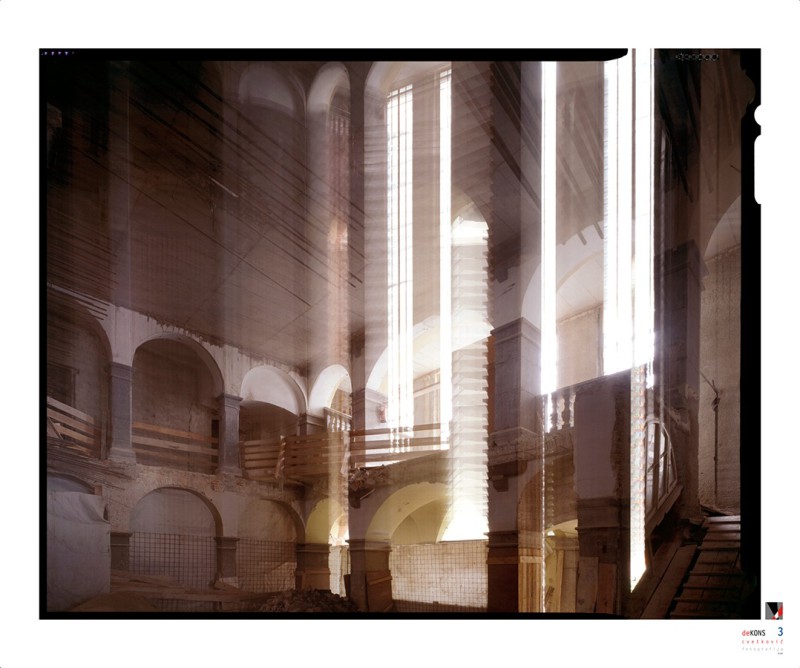 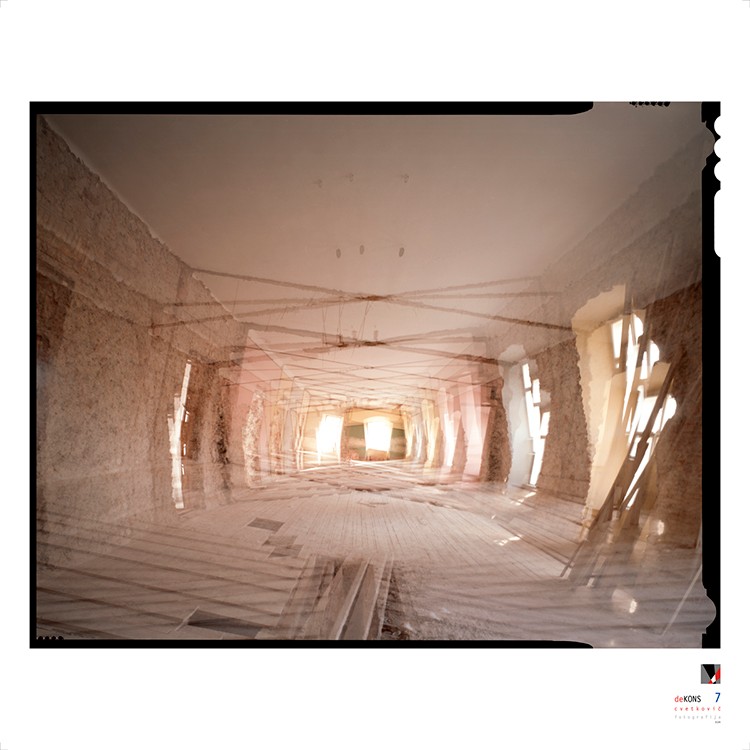 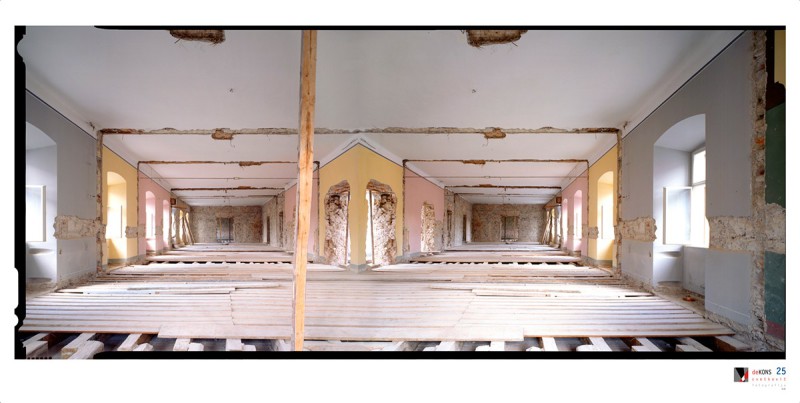 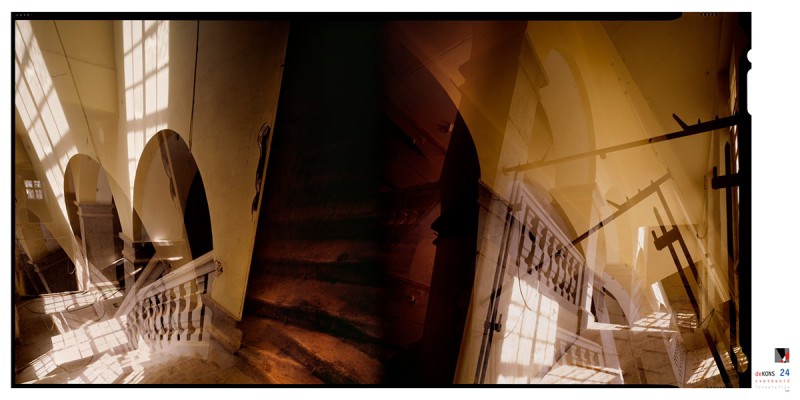